During and afterwards of Hitler’s holocaust there were studies conducted to investigate what led to the the massacre. Killing 6 million people is no small task. Mass shootings were inefficient to deal with such numbers, having an army isn’t enough. Without help of “ordinary” people it was impossible. They needed engineers to build their gas chambers, doctors to develop lethal injections, logistics to transport them to concentration camps to kill them systematically and efficiently.

“I did nothing, I was only following orders from the top.” said a leader of the Nazi army in the court.

This is an experiment conducted by Professor Stanley Milgram.

Milgram published a Newspaper advertisement in 1961. Here is the ad. 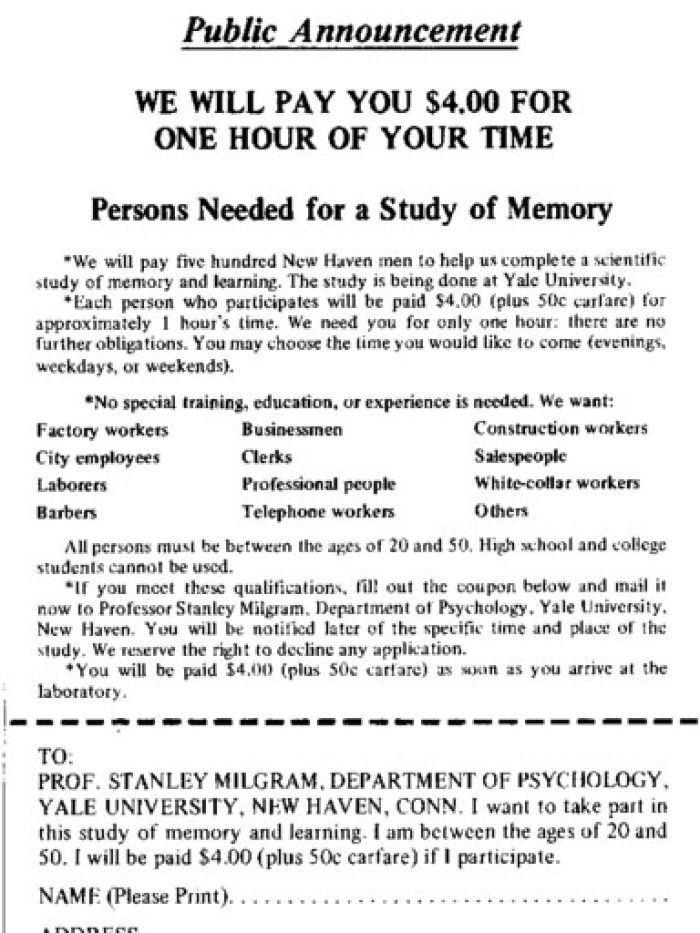 Three individuals took part in each session of the experiment:

26 (65%) of the 40 “teachers” gave the maximum voltage of 450. Only one person was given a voltage of less than 300 voltages. Do not forget these are all ordinary people. Even after doing this test several times, the results have not changed much.

They were just following orders. They even had a choice to leave the experiment.

Note: All of the reasons for Hitler’s massacre can not be explained by the Milgram test. There are many other reasons.

This experiment was conducted by Solomon Asch. Participants were only asked to take a vision test. 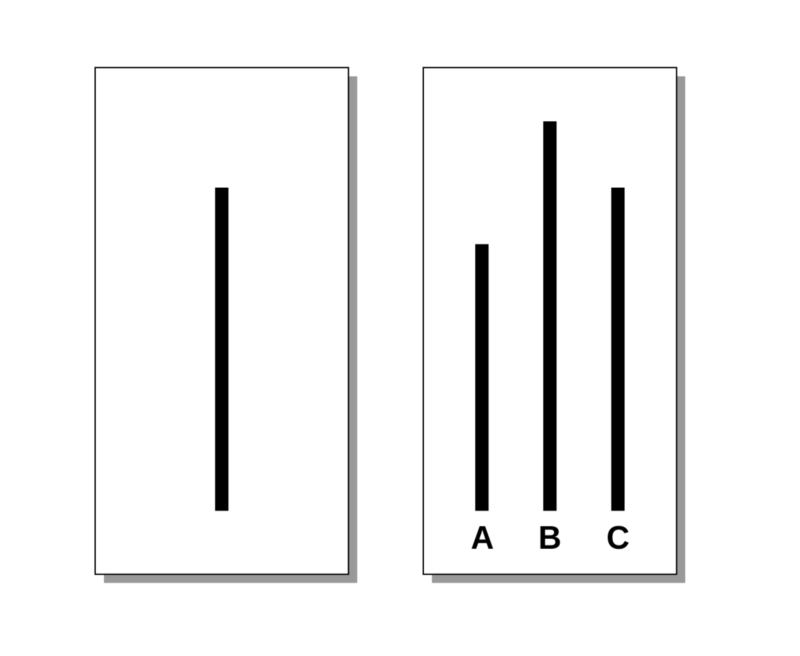 All but one of the participants were actors, and the true focus of the study was about how the remaining participant would react to the actors’ behavior.

The actors knew the true aim of the experiment but were introduced to the subject as other participants. Each student viewed a card with a line on it, followed by another with three lines labelled A, B, and C (see accompanying figure). One of these lines was the same as that on the first card, and the other two lines were clearly longer or shorter. Each participant was then asked to say aloud which line matched the length of that on the first card. Before the experiment, all actors were given detailed instructions on how they should respond to each trial (card presentation). They would always unanimously nominate one comparator, but on certain trials they would give the correct response and on others, an incorrect response. The group was seated such that the real participant always responded last.

75% of the participants followed actors and gave the wrong answer.

This was interpreted as the power of conformity, the desire to be “fit in” and to be correct.

Examples of conformity from the real world

“If everyone is thinking alike, then somebody isn’t thinking.”
― George S. Patton

Although it is illegal to conduct Milgram type of experiments today. It certainly makes people rethink human behaviour. Before the Milgram Experiment, experts thought that about 1–3 % of the subjects would not stop giving shocks. They thought that you’d have to be pathological or a psychopath to do so. None stopped even when the learner said he had heart trouble.

Asch experiment is one of the easiest questions for someone even that ended up surprising results. Later researches revealed that increasing the difficulty of the questions made participants to conform even more. When they were allowed to answer in private conformity decreased.